Kindle
Nook
Kobo
iPad
All others

When they met it was murder... like a real Hart to Hart. Authors Janet Elizabeth Lynn and her husband Will Zeilinger just released the second novel in the Skylar Drake Mystery series, STRANGE MARKINGS, a Noir mystery set in 1950's. They have been writing separately for over a decade and have two more Skylar Drake Mysteries in the works.

No posts.
No posts.
Home
Subscribe to: Posts (Atom) 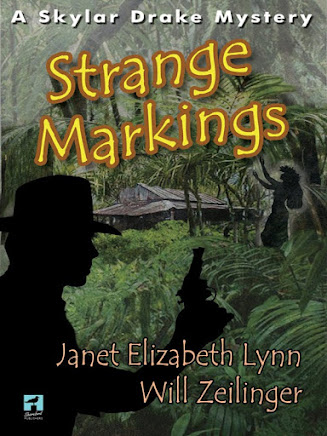 The Pacific breezes blow many things in from the ocean, this time its power, greed, and murder. At the dawn of the television age in 1955, Skylar Drake is called to identify the remains of a fellow movie stuntman found buried in a shallow grave. While there he is shown mysterious wounds and strange tattoos on two additional bodies.

A wealthy Bel Air matron sends her enticing niece to enlist Drake’s help in locating a missing nephew. The search takes him back to pre-statehood Hawaii where he stopped off on his way to the hell of the Korean War. Unexplained deaths, politics and superstitious locals turn the tropical paradise into a nightmare where nothing is what it seems and no one can be trusted.